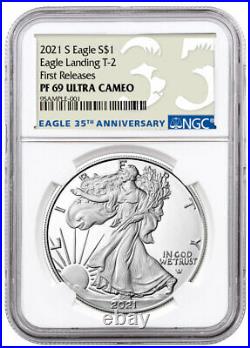 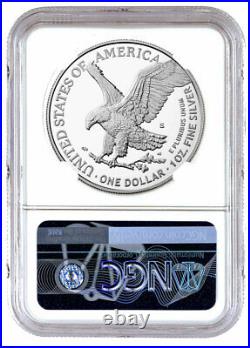 MCM Picks: Memorial Day. 2021 S Proof American Silver Eagle Type 2 NGC PF69 UC FR 35th Anniversary Label SKU65165 PRESALE. Why order this Proof 2021-S Type 2 American Silver Eagle? The Proof Silver Eagle gets its first ever major redesign in 2021 as the series marks its 35th anniversary. John Mercanti’s Great Seal of the United States design has been replaced on the reverse by an eagle design of Emily Damstra. Other changes include the introduction of an interrupted serrated edge, which is a new security feature, and the first ever inclusion of Adolph Weinman’s artist mark in the history of the series. This historic release is not to be missed by any fan of this classic series. This coin was struck on a 1 oz planchet of. This piece bears the “S” mint mark of the San Francisco Mint. The proof is part of the 35th anniversary issue of the series. This is among the first-ever Type 2 versions of the beloved coin series. The new type features a new reverse design by Emily Damstra. Adolph Weinman’s artist mark is included on the obverse for the first time in the history of the series. Mint introduced a new security feature, an interrupted serrated edge, on this issue. Numismatic Guaranty Corporation (NGC) graded this coin Proof 69. NGC certified this piece Ultra Cameo and First Releases. Grading information comes printed on a 35th Anniversary label. Patriotic Eagle Landing Design by Emily Damstra. Obverse: Adolph Weinman’s iconic Walking Liberty design graces the obverse. Liberty dons a Phrygian cap and is draped in the American flag as she carries laurel and oak branches as the morning sun begins to rise. Her name, “LIBERTY, ” is inscribed at the top of this face, while other inscriptions on the obverse note the date, “2021, ” and the national motto, IN GOD WE TRUST. Adolph Weinman made numerous numismatic contributions. He is most famous for designing both faces of the Walking Liberty Half Dollar and the Mercury Dime. Reverse: Emily Damstra’s Eagle Landing design makes its debut on the reverse, replacing John Mercanti’s adaptation of the Great Seal of the United States. An eagle carries an oak branch as it prepares to land. Rim inscriptions are the same as the ones on previous coins in the series: “UNITED STATES OF AMERICA, ” “ONE DOLLAR, ” and 1 OZ. ” Just inside the rim inscriptions is another inscription, “E PLURIBUS UNUM. Virtually Flawless PF69 UC FR with 35th Anniversary Label. This coin’s grading information is provided on a label that notes that it is part of the 35th anniversary edition of this series. Numismatic Guaranty Corporation (NGC) graded the piece Proof 69, which means that it appears perfect to the unaided eye. NGC also certified this proof Ultra Cameo (UC) and First Releases (FR). The former indicates that the coin exhibits particularly sharp contrasts between deeply mirrored fields and heavily frosted devices, while the later means that it was submitted for grading no more than 30 days after its initial release from the mint. Don’t miss your chance to own this Type 2 2021-S American Silver Eagle Proof. Specifications for this 2021 S Proof American Silver Eagle Type 2 NGC PF69 UC FR 35th Anniversary Label SKU65165 PRESALE. NEW Type 2 Eagle Landing. We cannot make any price adjustments after the sale is complete. Product Photo Policy: MCM attempts to display product images shown on the site as accurately as possible. We take all of our photos in house and due to reflections on the mirrored or proof surfaces of a coin there may appear to be’black’ when there is not. If a coin has a color on it at all it will be described as’colorized’ in the description or title. Due to the large inventory we sell, we use stock photos. Serial numbers will vary from the image shown unless specifically stated in the product listing that the item pictured is the item you will receive. INTERNATIONAL ORDERS POLICY: We are accepting international orders from select countries. These charges are the customer’s responsibility. However, we cannot guarantee this due to the volume of orders we process each day. Beyond the 30-day return period, Company is under no obligation to accept return of any product, but may in its discretion do so pursuant to this policy, for up to one year from the invoice date. ModernCoinMart (MCM) was launched in 2004 and quickly set the standards for online sales of bullion, US coins and world coins. Join over 100,000 loyal customers and feel confident purchasing from a company that’s spent a decade building a solid and stellar reputation trusted and recognized around the world. That’s the MCM way. View more great items. 2013 5-Coin Set 5 oz Silver ATB America Beautiful GEM BU in Protective Capsules. 2021 S Proof American Silver Eagle Type 2 NGC PF69 UC FR First Releases PRESALE. 2019 United States Native American Comanche Tribe 6-pc Set Clad Coins GEM BU. 2021 S Proof American Silver Eagle Type 2 NGC PF69 UC Brown Label PRESALE. This listing is currently undergoing maintenance, we apologise for any inconvenience caused. The item “2021 S Proof American Silver Eagle Type 2 NGC PF69 UC FR 35th Anniv PRESALE” is in sale since Thursday, August 12, 2021. This item is in the category “Coins & Paper Money\Bullion\Silver\Coins”. The seller is “mcm” and is located in Sarasota, Florida. This item can be shipped worldwide.