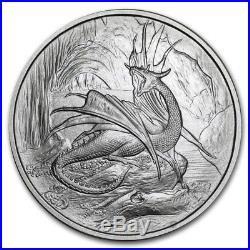 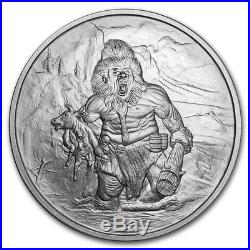 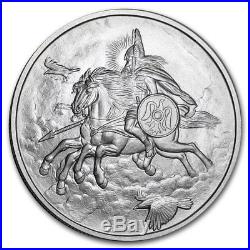 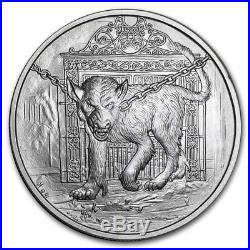 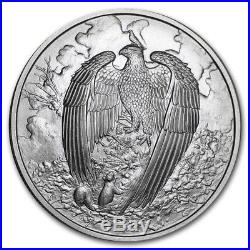 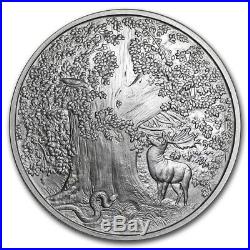 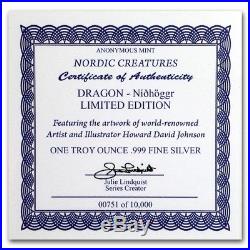 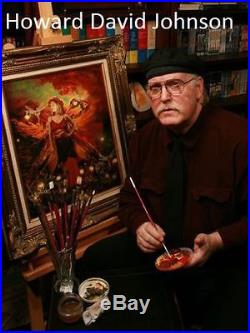 THE NEXT GREAT COIN SERIES FROM ANONYMOUS MINT’S JULIE LINDQUIST FEATURING THE ARTWORK OF WORLD RENOWNED ARTIST HOWARD DAVID JOHNSON. THE COMPLETE 5 COIN SET-ALL 5 NUMBERED COA’S WILL BE MATCHING. DETAILED DESCRIPTIONS OF EACH COIN CAN BE FOUND ON THE ANONYMOUS MINT SITE. I ntroducing Nordic Creatures, a new five coin series presented by Anonymous Mint and Julie Lindquist. Nordic Creatures features the artwork of world-renowned Artist and Illustrator Howard David Johnson. His realistic illustrations are forever captured in. To add dimension and detail, three dimensional sculpts have been crafted by Master Sculptor Luigi Badia. These exquisite limited edition coins have been struck at Osborne Coinage, America’s oldest private mint. Nordic Creatures brings alive myths and legends long forgotten. The Dragon Níðhöggr premiers the series as the first coin. The reverse design is The World Tree, Yggdrasil. Composition: One troy ounce of. Each of the five silver rounds in this series have unique obverse designs with detailed depictions of these fictional creatures, based on artwork that was debuted specifically for this series. Know n as the malice striker, features the fierce dragon that lives underground and punishes evildoers in the land of Nastrond. Is seen wading through a swamp and carrying a cow. The mountainous terrain of Jotunheim, the land of giants, looms in the background. Odins eight-legged steed, transports the norse god throughout the Nine Worlds. Ravens Huginn and Muninn are pictured here as travel companions. The supernatural hellhound, is pictured guarding the gates to the underworld. Legend says that his chains will break during the final battle of the cosmos, and hell be able to run free. Is seen sitting within the branches of Yggdrasil, the World Tree. A small hawk is perched on its head. A squirrel named Ratatoskr sits below the bird, ready to deliver messages down to Nidhoggr. The World Tree, Yggdrasil. Is portrayed on the reverse of the coin series. According to Norse mythology, Yggdrasil connects the nine Norse worlds. Yggdrasil is an immense ash tree whose branches reach far into the heavens. Its three roots grow in three directions – under one root is Hel and Niflheim, under the second root the frost giants, and humankind under the third. Beneath the root that reaches the frost giants is a well containing much knowledge and wisdom. Many creatures live within The World Tree, and the great ash suffers more agony then men can know, a stag bites it above, at its side it rots, and the Dragon Níðhöggr gnaws it below. The three Norns of fate care for the great ash. It was at Yggdrasil that Odin founded the runic alphabet making it possible for men to communicate through written words. Being the most holy of all places, the gods assemble there daily to decide what is just and unjust. After their daily council, they would travel the rainbow bridge home to Asgard, land of the gods. YOU WILL GET ALL 5 COINS. BEAUTIFUL ARTWORK FROM HOWARD DAVID JOHNSON. NUMBERED CERTIFICATE WITH EACH COIN AND ALL 5 CERTIFICATES WILL MATCH IN NUMBERS. WE HAVE OVER 35,000+ FEEDBACK. The item “NORDIC CREATURES 5 1 OZ SILVER COINS FULL MATCHING # SETS-DRAGON-EAGLE-HELLHOUND” is in sale since Saturday, June 23, 2018. This item is in the category “Coins & Paper Money\Bullion\Silver\Coins”. The seller is “evo-time” and is located in Emmaus, Pennsylvania. This item can be shipped worldwide.